January 14, 2009
How do you deal with a teenager who is failing in school, addicted to computer games, often misbehaves and even lies to you? I do know that teenagers really go through a tough time growing up (for I have experienced it myself) but I really do not know anymore what to do with our teenager at home.
In my family, we were all raised with love and trust. My parents instilled in us the virtue of responsibility, honesty and industry. Although we had our share of rebelliousness in the past, my sister and I were more or less well-behaved. We never really gave our parents a headache. In fact, I even think we made our parents proud by getting into the state university and graduating with honors.
The problem now lies in our adopted brother. You see, we had F when he was just 3 years old when his father (my dad's cousin) asked my parents if they could take care of one of his children since, because of poverty, he could no longer provide for the needs of most of his children. That was the beginning. So far, F has been living with our family for almost 12 years. He was treated like another child (raised with love and affection). He even has his own room and was given everything he needed. I just don't understand now how someone, who was raised the same way as we were raised, behave so differently.

I've been reading up lately on how to manage teenagers. I have read about various cases of teenagers, especially boys, who seem to hate school and rebel against their parents. There are even cases that get into vices like smoking, drinking and even drugs. Well, I know for a fact that F already knows how to smoke and drink. He even admits to us that he has been doing that. But drugs? I simply could not allow the time to come when we have to make an intervention and send him for drug detoxification. I would cry tears and blood when we get to the point that he needs to be put in a drug rehab.
Maybe I had been so understanding and trusting when it came to my brother. Maybe it's because that was the way my parents handled us. That kind of treatment worked for us and we responded well. But in the case of my brother, I don't think this kind of method will work. What style do you think will work? All I can think of now is to storm heaven with prayers.
In The Loop

Popular posts from this blog

April 10, 2008
I must admit that I'm not a very wise spender much less a saver. We spend a big chunk already of our family budget on Zoe's needs, food, utilities, salaries of our helpers, insurance, etc. Thus, when we still go out to dine or to shop for extras like nice clothes and shoes, our tendency is really to break the bank. I've realized the value of money and of budgeting especially now that my mother in law fell ill and is now in the hospital. She felt dizzy and started to vomit on Monday morning. My husband immediately took her to the hospital and they found out that her blood pressure had shot up and she needs to be admitted for treatment and so that the doctors can observe her condition. Since my mother in law depends much on us, we had to take responsibility for paying for her hospital bill. The problem is, payday is still far away and the doctor said she is well enough already to go home anytime today or tomorrow. So now we are consider getting a payday loan so that we can
Read more 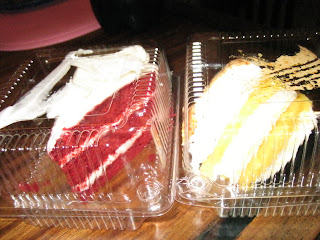 ﻿ My pregnancy condition did not allow us to celebrate/dine out on our wedding anniversary this year. But Hunny tried to make that day special for us still by making it a pizza and cake night, not just for the the two of us but for the whole family. :-) Love you dad!
Read more Warning: This is a super late post. After Zoe's 1st birthday last September 09, I got so busy already and wasn't able to post my suppliers' rating. So anyway, just to get it over and done with, I'll just make it short and sweet. What: Zoe's 1st Birthday Party When: Sunday, Sept. 09, 2007 (3-6 pm) Where: Tarragon Function Room, Cravings, Katipunan Theme: Hello Kitty Food & Venue: Cravings Account Manager: Carol Mantua We booked Cravings a few months before the party. I originally just booked for 60 people but towards the end, it ballooned to 130. I think the place is perfect for our taste. The aircon was strong, the place was clean, the interiors had class. Plus I saw that there was a lot that we can do to decorate the place. Carol was very accommodating and gave in to my many requests. She was easy to reach and seemed to understand the mind of a first-time mom like me. Food was good and yummy naman, though of cour
Read more